Snowblowers for discharging your winter duties and obligations

There are rules for clearing snow in Germany and Europe. This winter service is required to ensure that traffic keeps moving and to prevent hazards such as pedestrians slipping on pavements.

Often the "trusty old snow shovel" is fetched from the cellar or the garage for this work. Working with this manual tool is certainly strenuous and time-consuming. But, if you want to clear the snow significantly faster and more easily, use a motorised snowblower.

Thanks to the rechargeable battery, the IKRA snowblower is independent of mains power giving you great freedom of movement. The time-saving and effortless use of a snowblower is particularly worthwhile with large plots and long street frontages. 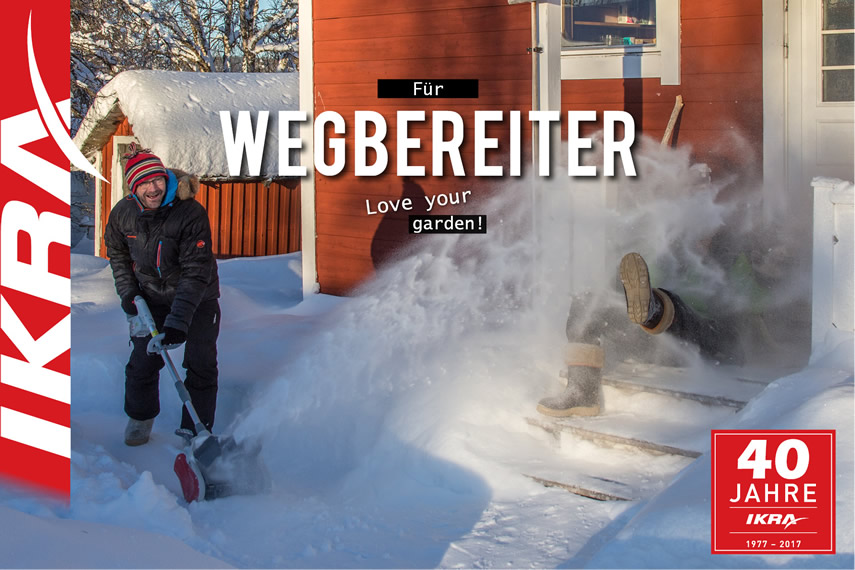 Snowblowers - clearing snow from the property and pathways

From December to February, it is winter in Germany and Europe. This often comes with snowfalls. Snowy days are becoming fewer and fewer in Germany. Particularly at lower altitudes. The snow line is rising continually. However, frequent snowfalls are still common in the south of the Republic, in Austria and, most of all, in Switzerland. Here particularly, there are locales, especially in skiing areas, that are constantly or frequently covered in snow.

In Germany and in other countries, e.g. in Austria, there is a legal requirement to clear snow. Even if there is no legal obligation to clear the snow, everyone knows that snow presents hazards and significantly impairs mobility. It is easy to slip on snow and ice, especially if ice has formed under the snow or if the ice crystals lie over one another as new snow. Both can be a slipping hazard. Vehicles too can easy skid on snowy surfaces. Cycling is almost impossible. If a particularly large amount of snow has fallen and surfaces are covered with deep snow, this makes walking, driving cars or motorbikes or riding bicycles not just very difficult but in some cases completely impossible. So, the legal obligation to clear the snow prevents hazards and maintains mobility for pedestrians and vehicles.

Often when it snows one reaches for the trusty old snow shovel, which almost everyone has in their cellar or garage, for clearing the snow. Clearing snow with the traditional snow shovel is laborious, strenuous and exhausting. Stop clearing the road and pathways laboriously by hand. A cordless snowblower is a better alternative. This is independent from the mains and significantly less effort than the alternative - the snow shovel. Thanks to the rechargeable battery you have no disadvantage in terms of freedom of movement. The great advantage over the snow shovel is that you can complete your winter obligations to clear the snow off pathways, your property, garage entranceways and courtyards, significantly faster and so can retreat to the warmth of your home again sooner. Think about clearing areas of heavy snowfalls. Here, the cordless snowblower is a very good alternative to free these of heavy snowfalls at regular intervals.

The Swiss and Austrians that live in the Alpine areas (mountain regions) in particular are often confronted with snowfalls and prefer the rechargeable battery powered variant as an alternative to the snow shovel. It is not unusual that the temperatures in these very regions are significantly below zero, in fact they are often more than 10 degrees below zero depending on the time of day, when shovelling snow. Another reason to be happy if the snow clearing work can be completed quickly so that you can return to the warmth of the house again or perhaps sit in front of the fire with a warming cup of tea or coffee.
If there is already ice underneath the snow, it is also recommended to sprinkle some road salt, grit or sand too. So, remove the snow layer first with the snowblower and then spread the grit/salt/sand on the ice. It is not recommended to "scrape" the ice off the surface with the snowblower. This could damage the device. It should ideally be used for snow, immediately after it falls if possible. (new snow)

Does your house have a long street frontage that you must keep free of snow or do you have a particularly large property? In such cases it is certainly worthwhile to purchase a motorised snowblower. This will save you a lot of time and energy. Snowblowers (cordless) save a lot of time and require very little physical exertion. 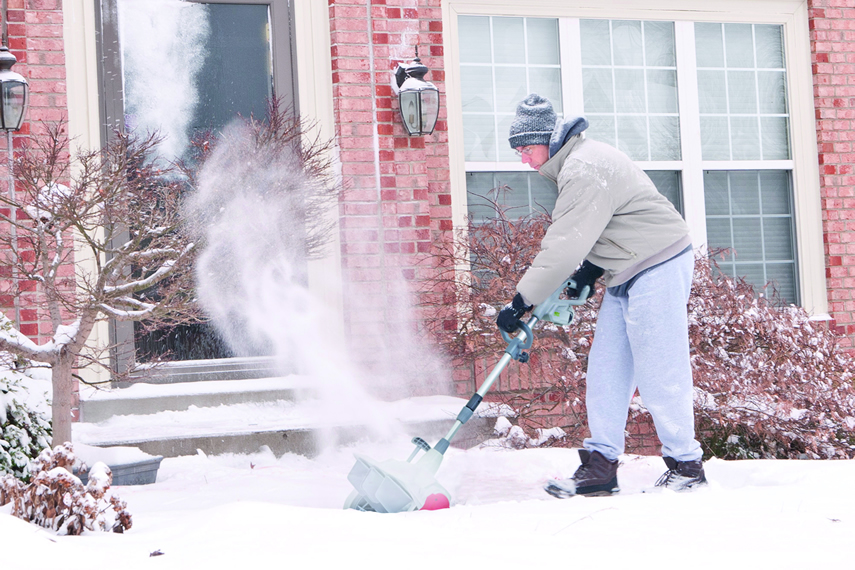